History and significance of the Audi car logo 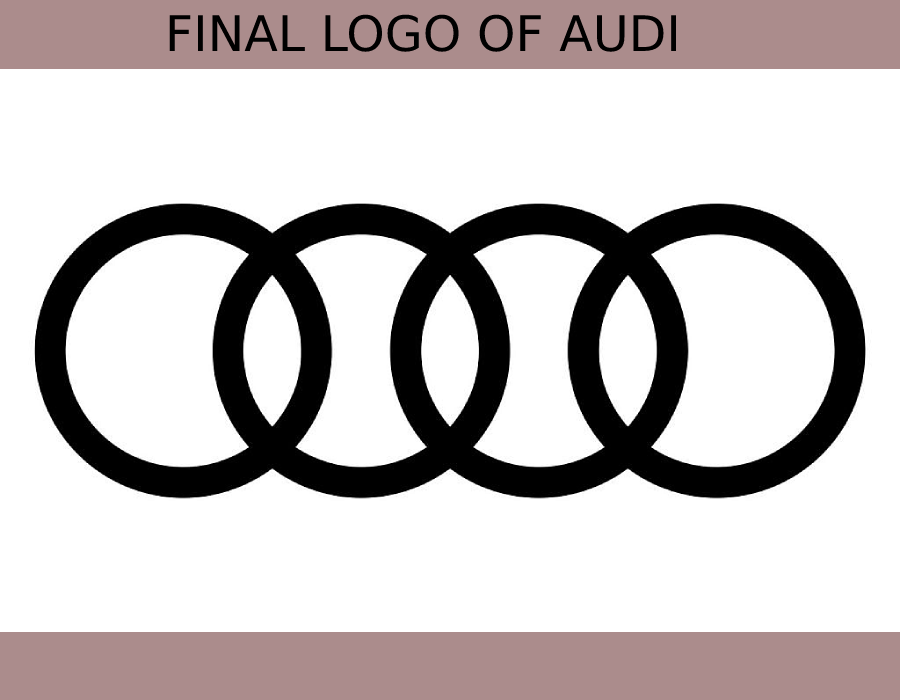 The outstanding Audi car logo arrive with profound meaning. Thereby, know the history and significance of the Audi car logo from this blog.

The vogue of the Audi automobile brand has pushed this logo in front of us many times. You also have seen this famous logo in Audi cars many times. Therefore, you might want to know its history and significance.

Essential information about the Audi brand

But the first thing is first – we began our study with the Audi car meaning.

The four rings on the Audi car logo are the simplistic form of the Auto Union. This auto union is the combination of four automobile companies – Horsch, Audi, Wanderer, and DKW.

The Audi car logo has a deep thought Unlike, some other straightforward logos. Practically, it shows the unification of four joint ventures. But, the Audi car logo also resembles high performance and innovation.

Jointly, the Auto union brings innovative cars to market. Their creative and new high-performance automobiles resemble the meaning of the Audi car logo.

The history and evolution of the Audi car logo

The logo have been modified on multiple occasions. Shifting of ownership brought changes in logo design. Well, view the evolutions of the Audi car logo from the adjacent section.

The first Audi car logo was so different from what I see today. It was such a simple and font-based logo. In an italic font, the audio word was in it. Overall, the logo was in the shape of a signature or something like that. The pre-launched Audi logo did not exist for a long time. However, the logo was so iconic and eye-catching as well.

Audi car logo changed in the beginning – of 1909

Surprisingly, the pre-launched logo was changed right before the official launch in 1909. The new design was in the letter T shape while the top was like a semicircle. On a triangle, the company name was written in Italic font. But the official logo wasn’t so attractive. Yet the company began its run with this particular logo.

As the previous logo wasn’t so attractive the change was unavoidable. Later, in the middle of the year 1909, the logo got a slight change. In this term, the change was on the font of the written audio mark. But the other parts remained the same.

In 1932, Audi formed a union with three other automobile brands. The formation of the company was known as ‘Auto union’. The auto union wanted to do group business to stay in the automobile competition.

For a change in the formulation and leadership, the Audi car logo has seen a significant change this year. The new logo of the Auto Union was completely different from the old logo of the Audi brand.

In the year 1969, the Audi logo saw significant change again. The name Auto union was transformed into Audi again. Therefore, changes were necessarily accepted in the logo design. The company completely renewed the logo design with the older ‘Audi logo’s concept.

Previously drawn rings were removed from that newly arrived logo. Furthermore, the letter NSU was added with the letter Audi in a different style.

The back part of the logo was a dark plate, where the fonts were in white shape. The 1969 Audi logo was a pretty straightforward one.

After 9 years, the logo of the Audi company was changed yet again. The previously drawn straight logo was transformed into an oval shape. The Audi was only mentioned in the middle part of the logo. Surprisingly, the whole logo was in red. To provide more focus on the brand name, the word ‘Audi’ was written in white large font.

This time, the logo was so eye-catching. However, the red color always raises some controversies. The same also happened with that particular logo.

In the year 1995, the ring design was brought again to remove the plated version. Here the rings were in 3D shape with a metallic shape. The brand name was added on the down part with a red font. The word Audi looked convincing in this version. However, the overall design didn’t touch the complete height of satisfaction.

In the year 2009, the word Audi was written in a smaller size. However, the positioning of the brand name was on the left side rather than the middle part. However, the circle shape remained the same. This logo design looked slightly incomplete due to the red color brand name. However, the company ran this design for 6 more years.

The final transformation of the Audi logo – 2016

Yes, the final transformation in the year 2016 was masterpiece art. All doubts were removed from this design. Still, this logo design continues with the brand.

To complete the design the letter ‘Audi’ was completely removed. Consequently, the ring color was transformed into black. The logo came up with the best transparent mode. This type of simple logo suits well with vehicles. Moreover, it looks so beautiful on cars while moving faster.

Surprisingly, there was another version of the Audi logo. It was in full silver color. However, this logo doesn’t have any brand name on it. That’s why it looks more beautiful. Of course, this is the more eye-catching version of these two logos.

The Audi car logo has indeed gone through so many changes. That mainly happened to change ownership causes. However, years of evolution have left two Audi car logo designs in front of us. The current version of the Audi car logo looks well adjusted with the modern time.

Clear further queries about the Audi car logo from this part.

What does the Audi car logo mean?

Why did the Audi car logo change?

The owner of the Audi car company changed several times. Therefore, the Audi car logo has undergone several changes. Another reason could be the adjustment with the period.

Yes, there are high chances of change in the upcoming future. As the Audi automobile company is currently running as a joint venture company, the ownership could be changed. Eventually, that will bring a change in the logo shape.

How many versions of the current Audi car logo exist?

There are two versions of the current Audi car logo existing. One is in a complete black ring, and the other one is a slightly metallic ring.